So let's talk about blogs. This one, in particular, and its evolution over the years. After all, this site wasn't built in a day, and neither was Rome. That's the expression, right?

This post will be in two parts. First, I'll talk about the history of my personal site, in its various incarnations, including this one. After, I'll get a bit technical, and get into the nitty gritty of how this new site works. If that's not your thing, my apologies, but feel free to just skip it!

Early on in my days at Bitmaker (the coding bootcamp I attended in 2016), they stressed to us the importance of maintaining an online presense. This seemed like a good idea to me, so I went home that night and started a blog on Medium. It looked something like this, and it's actually still live as of January 17, 2022. 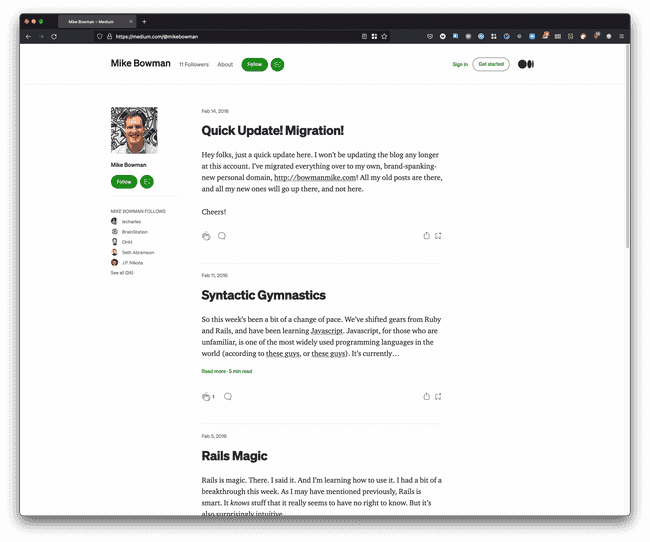 Nothing too fancy, but it certainly got the job done. Medium is a popular writing platform among tech types, and it worked for me for a while. However, pretty soon I got an itch. An itch to do something a little more challenging. Something a little more fancy, a little more tech-y. I wanted to boost my tech street-cred, more or less. I figured that the best way to get that done would be to build my own site, and host it on my very own domain name. So I went off and bought bowmanmike.com. My first choice, mikebowman.com, was (and still is) owned by a real-estate agent from Dallas, so that one was a no-go. But bowmanmike.com seemed like a solid option.

So there I was, shiny new domain name in hand. I got to thinking, how does one build a blog? At some point during the bootcamp, we were introduced to Jekyll. It fit the bill perfectly. I was able to write my blog posts using Markdown, which I liked. It was simple to set up, had lots of pre-made themes available, and was reasonably customizable. I got it wired up to my own domain name, and off I went. This was a solid solution, if somewhat visually unremarkable. It isn't live on the internet anywhere at the moment, but it looked like this. 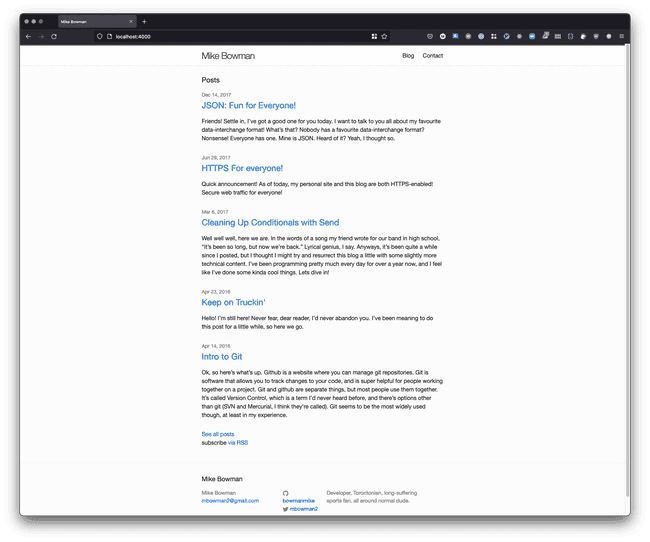 But kinda boring, and not really very technically interesting.

As you can see from the post history here, the blog kinda withered on the vine for a few years. I didn't post at all between 2018 and 2020. I didn't really have the time or energy to write, and I probably also thought that I didn't have anything worth writing about. Not sure if that was actually true, but whatever the reasoning, I went for several years without writing any posts.

But! I still wanted to exist on the web. I still had my domain name, so I figured I should at least put up a simple page with some contact info and whatnot. I never got very far down the road of building this particular site, but it did exist for a while, and it looked like this. 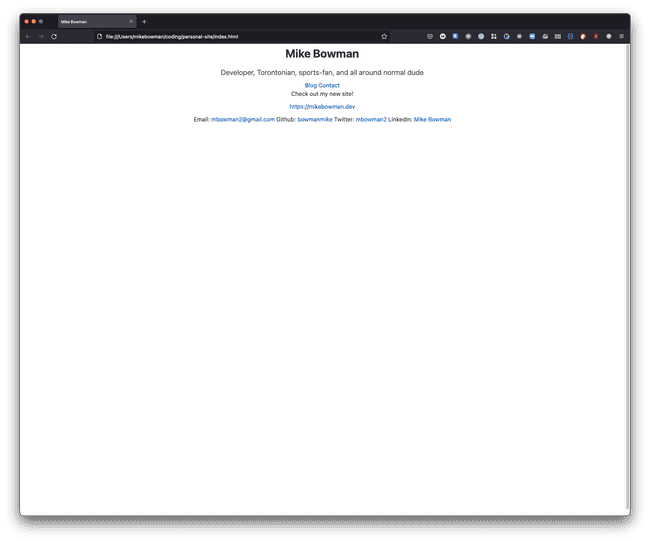 Very plain, but at least if somebody were to visit bowmanmike.com, there'd be something there.

This brings us to today. Obviously, you're looking at my new site, so there's not much to add here. I'm really happy with the design. It's not a template, it's an original design that I worked out with some assistance from some people with better eyes for design than I have. But ultimately, it's my own. I can say I built it from scratch. I know the ins and outs, I know how it works. I know where all the styles are coming from, and there's no template magic hidden behind the scenes. I'm thrilled with the result, and I hope you like it too!

This brings us to the technical portion. Like I said, if this isn't your thing, feel free to stop reading, and maybe click on one of the other pages I've got here! For those brave enough, lets forge ahead!

This site is generated using Gatsby. Gatsby, in many ways, is a spiritual successor to Static Site Generators like Jekyll or Hugo. Those tools allow you to generate a full site ahead of time, and just render out raw HTML (and some Javacsript, if you want). This means all you need to host it a static site, which has a bunch of benefits when it comes to things like simplicity of hosting, deployment, SEO, speed, accessibility... all that good stuff. Browsers are really good at optimising HTML, and servers and hosting platforms are also really good at optimising their delivery.

However, they can be a bit limited in their functionality. As soon as you need to do things like dynamically load data, they lose a lot of their benefits. For example, if you're loading your blog posts from a headless CMS or something similar, you'll need to query all that data at runtime, which takes a non-zero amount of time. There isn't really an easy way around it. This is where Gatsby (and other, more modern, Static Site Generators) shine.

Gatsby does a lot more work for you at build time. Gatsby has the concept of "sources", which are adapters to various data sources. This blog, for example, exists as a collection of markdown files. In order to do some magic like pagination, or showing a preview of the most recent post on the home page, they're imported into Gatsby through a markdown transformer, called Remark. This brings us to the key to Gatsby's ability to dynamically generate a site: it's GraphQL API.

Gatsby lets you build your static site using React, and it uses GraphQL at build-time to dynamically generate various pages and pieces of data. When the site builds, Gatsby spins up an GraphQL API. In your React components (and a few other places, but that's not really important right now), you can define queries that run at build time against that API. This lets you, for example, dynamically load your blog posts to build an index page with pagination, or a preview component. These pages are then rendered to static HTML and served to the client just like Jekyll.

Gatsby does sprinkle in some Javascript on the client-side to optimize a few things, such as page navigation and image loading, but the key point here is that the site works perfectly well without Javascript. At it's core, it's a simple HTML and CSS page that the browser renders. No magic, no dynamically loading data, just a quick, snappy, browser-native page.

Speaking of CSS, since Gatsby is a React app at build-time, you can use whatever CSS strategy you like. Inline CSS, CSS Modules, Styled Components, PostCSS, everything you'd expect to see in a modern React app is available. Personally, I like TailwindCSS, but you may have other opinions on the matter. Fortunately, Gatsby does not care a lick about how you want to do your CSS, so style those components to your heart's content, friendo.

This is far from a full overview of what Gatsby is capable of, but here's a few other things it can take care of for you:

While there's lots more of Gatsby you can investigate, this is a quick rundown of how it works, and how I'm using it. I hope you found something useful in here! There's some links below that may provide more context for some of the tech discussed in this post.

Until next time, cheers!